The collective noun for a group of historians is an “argumentation.”  No kidding!  So, what could be more fun than hanging out with a bunch of doctors?   That’s right, hanging out with an argumentation of historians.  And there are an awful lot of very smart people doing seriously good work — as historian Hugh Trevor-Roper once said, “. . . history that is not controversial is dead history.”  And he of course was no stranger to controversy.

The 2017 Annual Meeting of the American Historical Association is in Denver, and I (via public transportation no less!) managed to attend a few sessions.  No question medical conferences are better managed, and the really good ones are quite efficient at getting the latest information out to the maximum number of people in well-organized chunks. History conferences, on the other hand, are somewhat nebulous.  The AHA does its best, but when 25 sessions are running concurrently in each time slot, it is difficult not to feel that you are missing out.  Because of course you are missing out, probably on a brilliant talk in the next meeting room.

At the presentation level, I would argue that doctors in general make better speakers.  Different material, certainly, but some skills are universal:  speak clearly, and please emphasize your key points.  I sat in on a session titled “Doing Indigenous History,” and I am sure I would have learned more had I been able to understand the speakers better:  (1) slow down and enunciate (preferably into the mic); (2) do not speak as though everything were an aside; (3) do not slide into vocal fry or inflect your sentences into questions unless you really are from Down Under (Angel Hinzo, you are doing important research, but you sounded like a teenage girl and not a serious scholar when you phrase your findings as questions, because that unconscious upward inflection undermines your academic authority); (4) and please please please observe the niceties and remove your hat (Jordan Lee Craddick, the hat may be your “thing,” but seriously, at a conference presentation?)

I pick on Craddick and Hinzo because I have high hopes for them.  Both of them are at the beginning of their career, and I think they can learn a thing or two from their panel moderator Roxanne Dunbar-Ortiz, a historian who has been around for awhile and who knows a thing or two about being authoritative.  In the meantime, I think Craddick and Hinzo are both going to do interesting things, and I look forward to them making controversy and keeping American history challenging.

On a different subject: 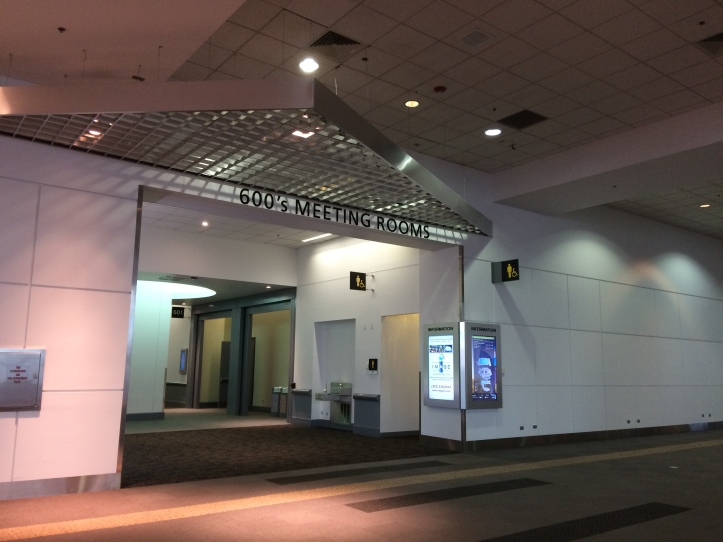 I wonder if anyone else (that would be any other historian) were bothered by the apostrophe abuse.  Clearly whoever authorized the signs at the Colorado Convention Center never bothered to learn the rules.  As DH would say, my personal windmills . . .